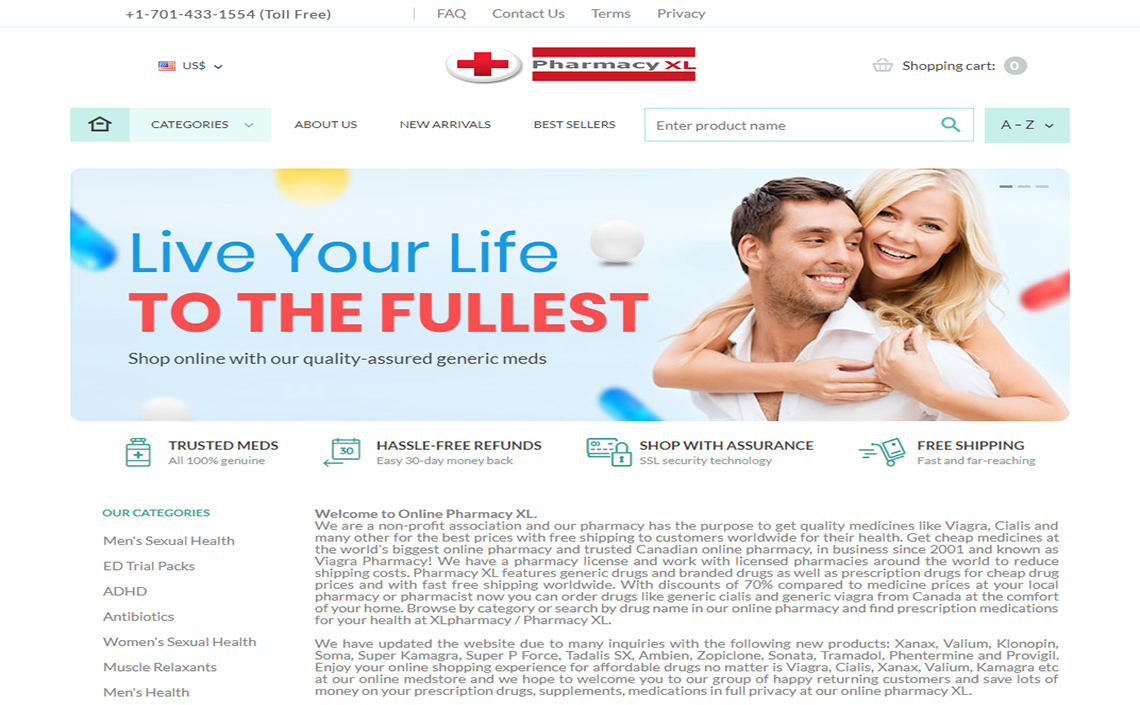 Pharmacy-Xl.com is a pharmaceutical company that sells medicinal products to consumers over the Internet. It operates as an intermediary which connects customers that are looking for drugs to the relevant pharmacies around the world who can service them.

The domain was registered on the 10th of August in 2016. In other words, the website has been in operation for a little over two years. There was a time when that might have earned the company a little more trust.

However, two years isn’t nearly long enough for anyone to say that the pharmacy is definitely legit. It isn’t that uncommon for online scams these days to stick around for three or even four years before finally shutting their doors. According to LegitScript, the company is among a series of Internet pharmacies that have gone to great lengths to establish a stable presence online despite the fact that their operations are illegal. 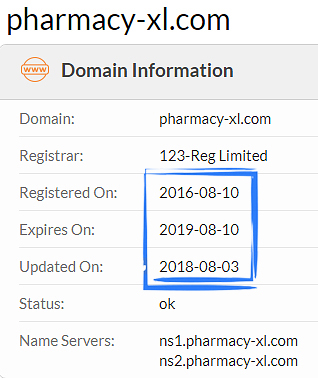 Much of the evidence surrounding this website is suspicious. For instance, their owner, who is listed as “Jan Janssen” is based out of the Russian Federation. Russia is a very high-risk country when it comes to online activities, and that might explain why ScamAdviser has assigned this website a trust rating of 21%. Interestingly enough, the servers from which the website operates also host a litany of other websites most of which ScamAdviser has given trust ratings as high as 90%. So even though the website is managed from Russia, the websites with which it is associated all seem perfectly legitimate and that actually works in Pharmacy-Xl’s favor. It paints them in a far more favorable light. 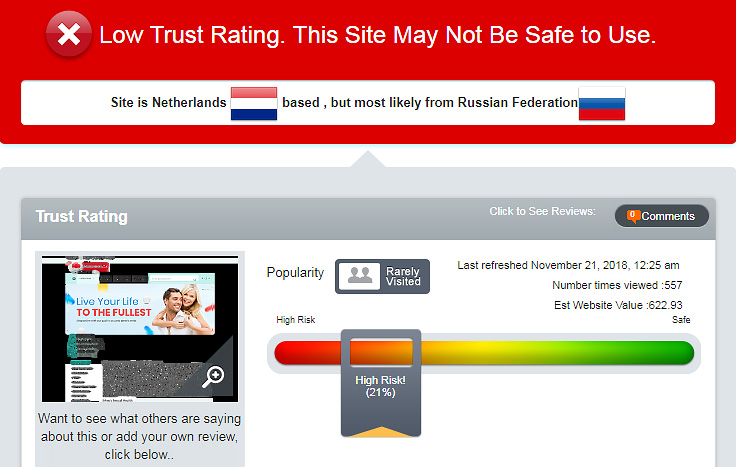 The company claims to have been in business since 2001. However, that particular tidbit of information makes no sense seeing as the website was only registered in 2016, more than a decade later. Additionally, they claim to operate within a network of licensed pharmacies that specialize in the provision of high-quality generic and branded drugs for which one requires a prescription to order. 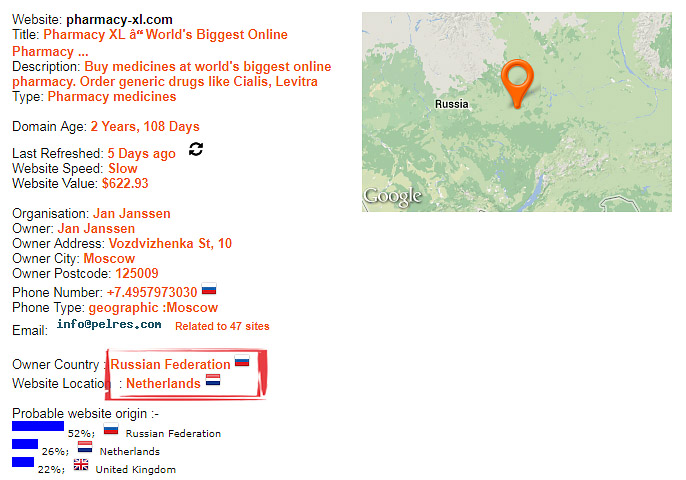 However, LegitScript has criticized the company specifically because they do not require their customers to avail prescriptions before servicing them. It should be noted that the website has a page from where they attack LegitScript’s credibility. According to the company, LegitScript is pondered primarily by big pharmaceutical companies who encourage it to denounce smaller competitors that might pose a threat to their bottom line. The company asserts that they have done what they can to meet LegitScript’s stringent guidelines but the resource has refused to take a fair approach to their business. They have assured its consumers that they are not the scam that websites like LegitScript say they are.

Even though this website claims to have an association with Canada, CIPA, an organization that verifies and authenticates the online pharmaceutical firms in the country, has never heard of them. Additionally, LegitScript calls them a rogue pharmacy. In other words, they do not have the legal authority to operate as an online pharmacy. 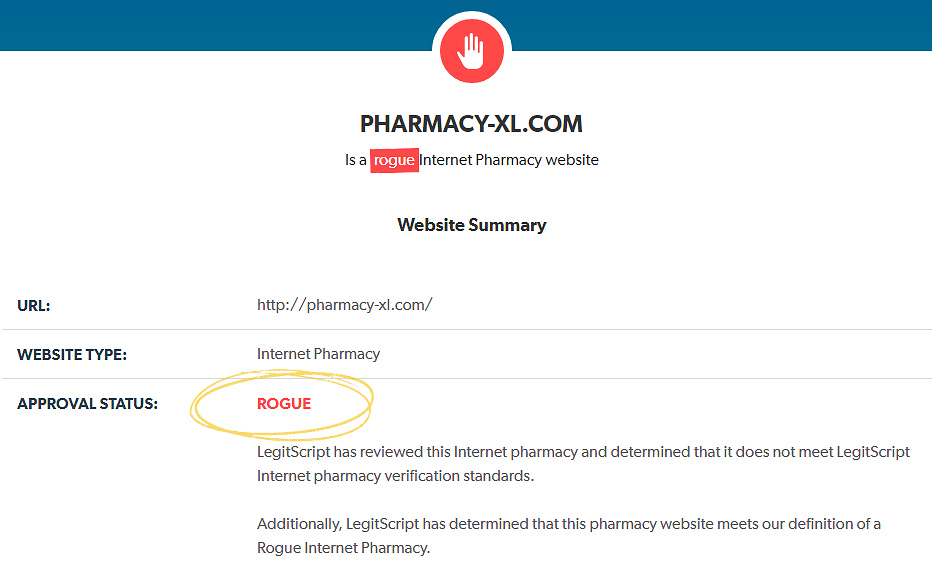 This website claims to sell drugs for everything from hair loss to weight loss. But they seem to emphasize products related to male and female sexual health above all else. Their drugs are manufactured by the top pharmaceutical companies in the world, so they are perfectly safe. The company doesn’t provide the names of any of these manufacturers so these claims cannot be verified. The pharmacy also says that every order made by every client is carefully vetted by a medical professional. But, again, LegitScript doesn’t believe that such claims are true.

This website has some of the lowest prices you will find anywhere on the Internet. Their price tags are so friendly because they do not spend money on marketing or branding. The company also claims to acquire their products at a very low cost. When it comes to payments, the website only accepts credit cards like Visa and MasterCard. On the issue of deliveries, this website offers Free Global Shipping on 99 percent of their products. Deliveries are made via Registered Airmail.

This website has a few scattered reviews on the Internet. Some are positive and commend the company on delivering as promised. Others have called the pharmacy a scam. The company doesn’t actually have that much feedback from consumers online. 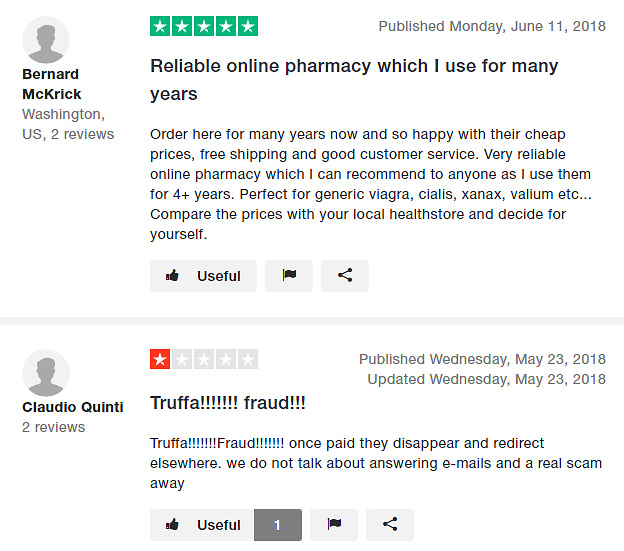 This website earns a 1-star trust rating. They have been around for two years or so, but that is neither good nor bad at this point. It helps their case that they are associated with so many legitimate websites. But one cannot ignore the damning report LegitScript has written on them.